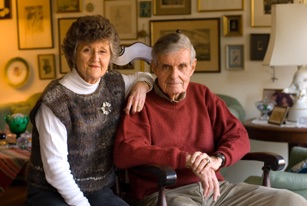 Dick Woodman was born and raised in Milford, New Hampshire. He was the only child of Ralph and Beth Woodman, both veterans of World War I; he a soldier, she a nurse. Dick Woodman attended Milford High School until his junior year and graduated The Manlius School, Manlius, New York, in 1946. He earned a B.A. degree in Military History from the Virginia Military Institute in 1950.

Commissioned as an Army officer, Dick Woodman served in many duty assignments during his 30 year military career, including Germany, Japan, and Iran, as well as numerous stateside postings. Primarily an Armor-Calvary officer, Dick Woodman spent a significant portion of his career in The Military Intelligence Service serving in Viet-nam in 1968, and holding the positions of Assistant Army Attaché to Yugoslavia in the mid-1960s and Defense Attaché to Norway in the mid-1970s. Col. Woodman earned the Legion of Merit, the Bronze Star, the Meritorious Service Medal, and both the Joint Service and Army Commendation Medals. He retired from active duty in 1980 in Atlanta.

Dick Woodman was an administrative wizard; and, he applied these managerial talents over the next decade and a half in the service of the others, for an institution he loved, the Episcopal Cathedral of Atlanta, St Philips. He retired as the Cathedral’s Administrator in 1993, to spend time in active support of his wife, Julia’s career in silversmithing. Together, they would spend the next nineteen years traveling the world as Julia’s talent and notoriety grew. He lived the life of accidental tourist and househusband wherever Julia’s career took her, including The Penland School and Wild Acres, in Western North Carolina, as well as, a year in Lahte, Finland under a Fulbright Scholarship. He dearly loved this period in his life, during which four grandchildren were born, Julia became a teacher and mentor to many talented young artists, and he was able to work towards establishing and nurturing the Buckhead Christian Ministries, a multi-denominational effort to help struggling families.

Dick Woodman loved simplicity in life. A quiet, unassuming man with an extraordinary presence, he found profound joy in his family, the quest for knowledge, the outdoors and his friends. He was a loving husband to Julia for 55 years and a beloved father and grandfather. He will be missed deeply by all who knew this gentle giant of a man. Dick Woodman quietly died at his home of 36 years on Monday, July 30, 2012, Julia by his side.

He is survived by Julia; his daughter, Ann Blair, and her husband, Glen; his son, Charlie Woodman, and his wife, Kim; and his four grandchildren.

This website is a non-interactive brochure site that uses only cookies that are categorized as necessary and essential for basic site functionality.

We DO NOT use any other cookies such as those that help analyze how you use this website.